JUDY WOODRUFF: Tonight's Brief But Spectacular features comedian Nick Kroll. He mined the hilarious and mortifying experiences of adolescence to create the animated Netflix series Big Mouth. Although it is a period of life some of us would prefer to forget, Kroll says it has been healthy to revisit his past.

NICK KROLL, Comedian: Big Mouth is my animated TV show on Netflix. It is about my journey through puberty with my best friend, Andrew Goldberg. It's based on our childhoods. Andrew became a writer for Family Guy, and I became a comedian, and then we came back together 30 years after we met to create this show. We knew from the beginning that we wanted this to be animated. We felt like we wanted adults to voice the kids. I think I voice over 30 characters on the show. There is the voice of Nick. This is Nick's voice. There is the Hormone Monster, who is Maurice. There's Coach Steve. Hey, what's up everybody? I'm Coach Steve. There is the Jansen twins. They are two twins. There's a little Ladybug. And Ladybug will tell you what's what on a daily daily. And I don't know. There's like 25 more voices. The tone of the show is very dirty, but I think it is equally weighted with an incredible warmth and sincerity.

ACTRESS: You're actually kind of fun. ACTOR: You think so?

ACTOR: Should we like, I don't know, take a picture?

ACTRESS: Yes, go for it. You're very photogenic from that angle. Not that one. Yes.

ACTRESS: Yes, a little to the right, and go. Hunk alert.

ACTOR: What's that? ACTRESS: That's like an Amber Alert, but also there is a kid missing in a red Mazda. 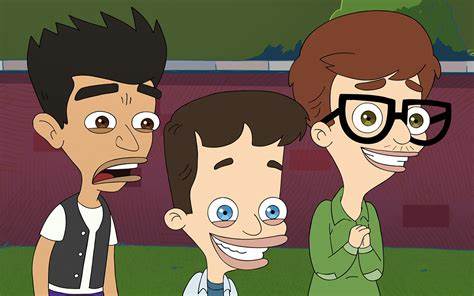 NICK KROLL: Being a late bloomer meant that I just physically matured a lot later than most of my friends. I didn't hit 5 feet until into high school. Andrew was the earliest bloomer. It didn't take much to realize that Andrew was hitting puberty, because he could grow a mustache and beard in sixth grade. Whether you were a late bloomer or an early developer, you felt alone, and you felt like you were different. Season two of Big Mouth, we introduced a character called the Shame Wizard.

ACTOR: Surely you knew I was coming?

NICK KROLL: And in writing the show, we realized how much shame played into adolescence and puberty itself.

ACTRESS: I wish I didn't have to wear a bra. What is that, an undershirt?

NICK KROLL: Your body is changing. You're having these different kinds of urges, sexual urges, emotional swings. What comes with those emotional swings is the feeling of shame. I was lucky in my family that we did talk about sex, and we had these books called What's Happening to Me? The most gratifying thing about making the show has been hearing from kids and parents and teachers saying that they have watched the show, and it has given them a platform and a vocabulary to talk about what's happening to them. The show at its core is about making people feel not so alone. As I have made this show, the experience has been incredibly therapeutic in helping me understand who I was and how what I was going through has affected the man that I have become. My name is Nick Kroll, and this is my Brief But Spectacular take on characters of different ages brought to life.

JUDY WOODRUFF: And you can watch additional Brief But Spectacular episodes on our Web site, PBS.org/NewsHour/Brief.