JUDY WOODRUFF: Apollo 11 astronaut Michael Collins died today after battling cancer. In 1969, he stayed in lunar orbit alone for more than 20 hours, while Neil Armstrong and Buzz Aldrin made the first landing on the moon. Collins said he had no regrets. He said he was focused instead on making sure that his crewmates could return home. During the 50th anniversary of that, Collins told Miles O'Brien that he was mesmerized by our planet.

MILES O'BRIEN: On their ride back home, they marveled at our perch in the universe. The moon was their destination, but, for Collins, the real discovery was Earth itself. 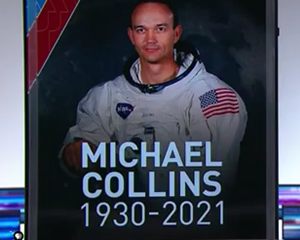 MICHAEL COLLINS, Former NASA Astronaut: All right, I have got the world in my window for a change. The moon was nothing compared to my view of home planet. It was it. It was the main chance. I would look out the window, and there would be a tiny little thing. You could obscure it with your thumb. But every time you put it away somewhere, it would pop out. It wanted you to look at it. It wanted to be seen. It was gorgeous. It was tiny, shiny, the blue of the oceans, the white of the clouds, little streak of rust color that we call continents. It just glowed. Having gone out 240,000 miles and seeing it gives me a much greater sense of fragility, a much greater urge to do something to protect that fragility as we go along.