BBC News. Hello, I'm Tom Watts.India has recorded for the first time more than 4,000 deaths in one day from the coronavirus. There are fears that the actual number of deaths is much higher and that the current surge of infections, already over 400,000 a day, may not peak until the end of May. The BBC's Devina Gupta who's in Delhi says oxygen shortages are still causing problems.For now, hospitals claim India gets less than half of 700 metric tons that it requires to deal with the current crisis. Delhi's chief minister has so far said oxygen crisis is abating in Delhi and there is being a crackdown on those who been holding oxygen kits and private entrepreneurs who have been selling them at a higher rate to the public, which is in need at the moment. 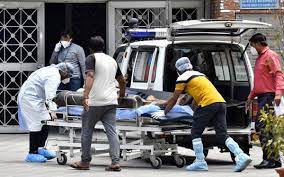 Pakistan has introduced coronavirus restrictions on travel and tourism ahead of next week's festivities marking the end of the Muslim holy month of Ramadan. Nonessential businesses including hotels and restaurants must remain closed and travel to areas normally popular during Eid ul-Fitr have been banned.

Defense officials in Afghanistan say the security forces have launched a counter offensive against the Taliban in the northern province of Baghlan.Here's our South Asia editor Jill McGivering.This is the 4th day of heavy fighting in Baghlan. It's mainly focused on two districts where the Taliban reportedly seized government posts. Now, Afghan troops bolstered by special forces and air support are on the offensive, trying to regain them. It's one of half a dozen provinces currently reporting violence.This is a period of intense uncertainty for Afghanistan. US-led troops have started to withdraw, raising concerns of a power vacuum and fears the conflict will worsen. On Friday, Taliban representatives held an online meeting with officials from the US, the UN, the EU and several European countries about resuming stalled peace talks.

Demonstrators in Mexico City have held a vigil and a march at the sight of the collapse of a subway overpass in which 26 people died and scores more were injured. They are demanding justice for the victims of Monday's disaster. The authorities have promised to hold an investigation.Our correspondent Will Grant is in the Mexican capital.Protesters carried placards and chanted slogans such as "It wasn't an accident. It was negligence" as they walked along the affected part of the metro system, Line 12. They are furious that as more details emerge, it seems that successive warnings from engineers, drivers and local residents about the poor construction of Line 12 had been ignored. The newest of the city subway lines, it was unveiled less than a decade ago, but it was closed for more than a year and a half over structural faults on an elevated stretch of the line.Will Grant in Mexico City. This is the world news from the BBC.