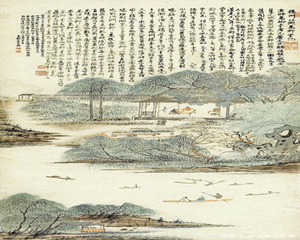 The Mansion of Willow

When people in the past became extremely exalted and rich, they would build garden villas for their pleasure, exhausting all the superb workmanship of the building craft, sparing nothing within their reach. But after the completion of the villas, they could not afford to live there long and came only once in a while. Some were unable to come all their lives. Yet those who had lived long at the place had not the means to build them. As for the good ministers occupied with state affairs, they certainly had no time for them. So it was only the base and mean who wanted them to overwhelm the ignoramuses among their townsmen with such a vanity.

Prime Minister Feng of Linqu, a man who had neither merits nor demerits when he was at court, built a garden mansion at the southeast corner of the capital, with a total area of thirty mu. It was planted, according to the configuration of the ground, with willows unmixed with any other trees, and the mansion was named the Mansion of Willow. The garden could be seen by riding travelers over the parapets. It had twisted and deep lanes as well as a pond laid in a depression and knolls made out of excavated earth. The pond, surrounded with weeds, looked lovely because of the dim reflection of clouds in the water.

Not long after I had come to the capital at the beginning of the Yongzhen period, the frequent excursionists all told me about the scenic splendour of the place. When I first visited it, a few arbours and pavilions still stood there. At the second time, the bridge previously spanning the pond lay slanting in the water, while at the third time, the planted willows were all cut down, without a single survival.

The glory imparted by wealth and honour in one's life is enhanced and eclipsed with time, which is well-nigh the same with this garden. If a gentleman has gained some insight into this fact, he had better now envy it. As for those who are swamped with wealth and honour, they are simply best with ensuring worries. Such being the case, what need is there for them to suck the blood of the people for the sake of building magnificent garden mansions?